Holistic Purpose of the Holy Spirit's Outpouring in Liberia. 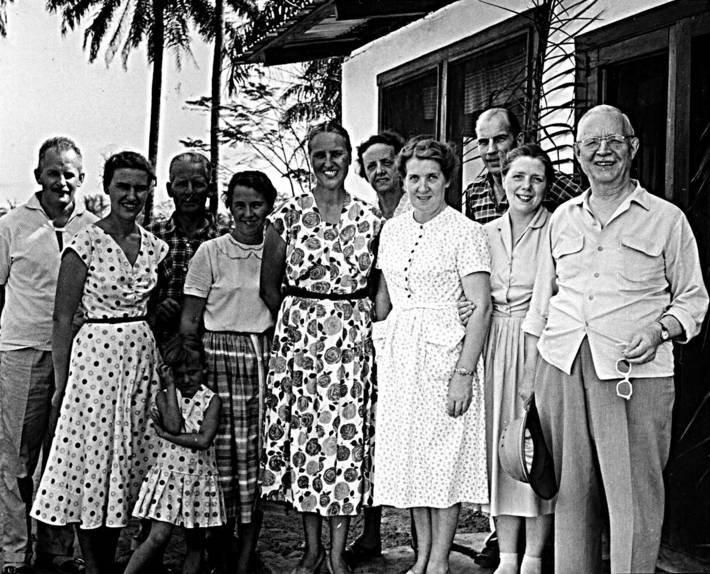 This article is dedicated to an apostolic statesman from Sweden, Lewi Pethrus (1884-1974). He is the Founder of the Free Pentecostal Church in Stockholm. Sweden. His ministry affected Liberia greatly. Missionaries from the Free Pentecostal Church served in Liberia for many years. He truly was an embodiment of holistic ministry. In 1964, he spearheaded the founding of Sweden's Christian Democratic Party.

In this photo, he is seen standing on the far right with Swedish missionaries in Liberia.

When Yahweh made the heavens and the earth in Genesis 1, he concluded that everything he had made was good. It was good for Gods man: Adam. Every provision that man was in need of was prepared beforehand. In essence all of man's needs were completely and entirely met. This was all before sin entered in to the world. After sin took dominion over creation through the fall of Adam (male and female), full provision became a struggle. But remember that this was not God's original purpose for man and the earth.

Without sin, we would not have experienced or known poverty and want. Indeed , man would never have known religion as has been experienced throughout the ages. The purpose of Yahweh was for man to be led by the Spirit in accomplishing God's purpose on the earth. Remember it was the Holy Spirit who moved on the face on the earth and brought God's creative Word to pass. He is Creator (Job). In cooperation with the Eternal Spirit, nothing would have been impossible to mankind before the fall.  Being led of the Spirit from the inside, by revelation, man would have fulfilled the purpose of God in dominating the earth without limit. We however know that this was not the case. Man failed.

We know the consequences of the fall: sin, death, destruction entered the earth. Man became a slave of the devil. However, God in His great love wherein he loved us instituted a plan (Gen. 3:15), to redeem man. This plan was fully implemented through the second Adam, Jesus Christ.

Now, my purpose for writing this brief article is to reveal the fact that Jesus did not only die to redeem man, but to also redeem all things. When man fell, all that was under man's authority was affected. Conversely if man is redeemed, all that was under man's authority should be affected by the redemptive power of the blood of Jesus. We want to look at a few Scriptures:

20 And, having made peace through the blood of his cross, by him to reconcile all things unto himself; by him, [I say], whether [they be] things in earth, or things in heaven. 21 And you, that were sometime alienated and enemies in [your] mind by wicked works, yet now hath he reconciled (Colossians 1:20-21).

Jesus did not only reconcile man back to God, but "all things" were included. The things inn heaven and on earth were fully reconciled. If these things (inanimate objects) were reconciled, the conclusion is that these things are now under the power and influence of the Holy Spirit who is working through believers individually and collectively. Under the law, Moses sprinkled both the people and tabernacle and other instruments of worship with the blood of bulls and goats. Hebrews 9:23 clearly teaches that the heavenly things had to be purified by a better sacrifice. The earthly things are only a pattern of the real in heaven. When the original is reconciled, we have no problem with dealing with the copy.

If all things have been reconciled to God, we can safely conclude that redeemed men and women have the right and ability to rule all these things as the first Adam did before the fall. I must submit that the Holy Spirit is here to help us exercise our God-given dominion over these things (creation) as Yahweh had purposed in the beginning. The purpose of redemption was never meant for mankind to migrate to heaven. If that was the case then God would never have placed man on the earth in the first place. At the end of the Book, a new earth will be created and the new Jerusalem will come down out of heaven and God shall forever dwell with men. God's original purpose will never be thwarted.

What has all this got to do with Liberia? Very much in every way. This land of liberty founded in 1847 by able missionaries like the Baptist Lott Carey has really never risen to its purpose of being a bright shining star on the promising continent of Africa. There have been glimmers of hope here and there in its checkered history. However, without delving into the causes and effects of Liberia's woes, we can agree that the Church has been a major player both in the nation's spiritual and natural development. As much as we can commend the Body of Christ for the spiritual work done since the  founding of the nation, nothing significant has been accomplished in solidifying the foundations of socioeconomic development of Liberians and their posterity. Failure in this all important domain lies in the fallacy of separating the secular and the spiritual (religious). The Church has abandoned all things economic in either the hands of the government (mostly corrupt) or the children of wrath. Remember, in the beginning of this article, I mentioned that God did not create religion. Adam was a 'secular" man so to speak. The Spirit of God is here to show us all things.  We must begin to seek keys to the economic redemption of Liberia from Him Who shows us things to come.

I cannot begin to exhaust the list of nations, regions, areas, continents that have risen up from economic ruin to bastions of prosperity through the power of the Spirit. Yes, we do minister individual prosperity but God's purpose is for "all families of the earth to be blessed". And yes, I believe righteousness is a blessing but Yahweh also told Adam to "be fruitful and multiply".

Here is a testimony of how the gospel of Jesus Christ should transform both a territory and its inhabitants:

"Almolonga is a village in Guatemala with an encouraging story of transformation. Before being visited by God’s power, it was a place overrun by fear, demons, poverty, idolatry, and drunkenness. The main feature was the alcohol-induced slumber experienced by many of the inhabitants as a result of serving an idol called Maximon. This perverse idol was a figure created to connect with the Guatemalans by highlighting the smoking habits, liquor drinking and immorality of this creation.
God called a humble man, Riscajehe Generated, to fight against the power of darkness found in this village. Because of this man’s obedience, people began to experience the liberation and transforming power of Jesus Christ. It has been reported that 90% of the 18,000 inhabitants surrendered their lives to Christ.
Since the power of God began to transform the community, the crime has had a marked decline. The police chief testified, “Currently, we usually have 20 to 30 people a month in jail.” Before, crowds would gather just to witness the nightly drunken fights. The police chief wouldn't have any rest. Before the community had four prisons and they were not sufficient to accommodate all the prisoners.
Today, things are different. People have changed their attitude; the last prison was closed in 1988. Remodeled and is now called the ‘Hall of Honor,’ which is a place for weddings, receptions and do community events.
In addition to the decline in crime, a great social change has occurred. There is an absence of prostitutes and bars. The former bars have been converted into small shops with new names such as ‘Little Jerusalem’ and ‘Jehovah Jireh.’ Before the intervention of God, most men were alcoholics and their homes were untidy. Neglect and physical abuse were rampant. It was very common for men to beat their wives, sometimes with sticks. Today, there is more communication between families and the abuse has declined. The unemployment, beggars, drunks sleeping on the sidewalk and other negative things have declined significantly due to the transformation experienced in this village.
Also, there has been an economic renewal. A phenomenon has occurred agriculturally in this village. The celery, cauliflower, cabbage, potatoes, carrots, radishes and other vegetables are incredibly larger in size that those grown in the surrounding villages. Agriculturalist from the United States has visited the location to study scientific principles that have allowed the production of better crops. The only logical conclusion is that God has blessed their crops and the farmers of Almolonga. Today, the people are selling vegetables in all of Guatemala, and exporting them to other nations.
The only logical conclusion is that this village has truly experience the transforming power of God. God has transformed the lives of people, the social influences, and the economy of this village."
( Culled from Stories of Transformation, http://www.goandproclaim.co.za/transformation_in_almolonga.php)
by Marv Robinson